Father and Baby Son Die While the Nations Cheer Their Murderers

While the world’s eyes and ears were focused on the UN, the direct consequences of the demands of one man, Abbas, resulted in the spilling of innocent blood.

FIRST REPORT:  Around the time Abbu Mazen (Abbas) was making his demands before the UN General Assembly, a young man was driving home on a highway near Hebron with his small son in a car seat behind him.  Police said he apparently lost control of the car, it turned over and a little later he and his baby boy were found dead in the wreckage of his car.  Police report that soldiers nearby saw no rock throwing in that area and their deaths were presented to the Israeli media as a tragic car accident, probably due to speeding.

THE CIRCUMSTANCE: Abu Mazen (Abbas) spoke at the UN claiming the right to rule a Palestinian State as the head of the PLO – a well-known 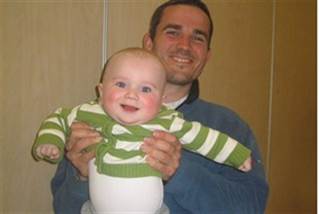 Asher Palmer and his baby son, Yehonaton, paid the price in blood and reputation, while politicians & commanders of the police and army cower before the albeit real threat of chaos & violence. He is not only a martyr; that makes him a hero.

terrorist organization.  In Israel a man and his one-year old son were driving home on a public highway near the ancient city of Hebron. In a terrible confluence of events, these Israeli citizens were now going to pay the price in blood for living in the UN-established State of Israel. Far-away in New York at the UN General Assembly, representatives of the world’s nations stood to cheer the very man who trains his citizens to kill. He instructs  them to murder citizens of Israel of any age, at every opportunity  in any way they can.

THE EVIDENCE: Those first on the scene could see clearly that the windshield of the car had been smashed and penetrated, but not by the accident. It had obviously been struck by a large object, the steering wheel cover was torn, the driver’s face showed injury typical of being struck in the face, without connection to the accident, and  a massive stone was seen on the front seat beside the driver with the driver’s hair and blood on it. One early responder reported that Asher’s gun had been removed from its holster.

THE BETRAYAL:  The deaths of Asher and his son, Yehonaton were reported as a tragic car accident due to speeding.  For their family and for all Israelis who must rely on the Israeli Police and IDF to protect them as they go about their daily lives under constant threat, this was/is a terrible betrayal.  The decision was made to cover up the terror attack so as not to ‘trigger riots’ while Abbas was speaking in the UN.

Perhaps that makes sense for the policemen or soldiers who have to confront the deadly stones with shields and guns, but they are at least trained and can legally use any official means of self-defense they have at hand  — and nearly never do they stand under attack alone, exposed, with their children at their sides.  For all the protection the police and army are empowered to provide for Israeli citizens in carrying out the legal activities of their daily lives, this man and his son were essentially confronting the terrorists alone. He was simply driving home on a public highway with his child.  A car appeared in front of him and a heavy, sharp rock was thrown through his windshield, hitting him in the face and causing him to lose control of his car. He didn’t have time to draw his gun. He didn’t have time to call for help. He and his child were alone and defenseless.  But he was made guilty of his own death and that of his son in order to make life easier for the politicians, the army and the police. He stood alone as a citizen of a civilized country whose authorities cowered behind the threats of terrorists.

THE  ALTERNATIVE: Why didn’t these same officers see an opportunity to EXPOSE the lies of Abbas as he called his future state a State of peace? As he called the Jews racists and murderers? Indeed, it would have  highlighted his statement that the PLO (PA State) will NEVER recognize any Jewish State in any part of “conquered Palestine”. It would have pointed up the clear meaning of the map he shows as his ‘logo’: Palestine from Lebanon to Egypt, from Jordon to the Mediterranean Sea. There IS NO Jewish State in the future of the Middle East, only Palestine. They will get it by one means or another: through propaganda and political manipulations with the dangerously foolish West and Anti-Semitic Arab states or by spilling the blood of as many as it takes wherever in the world they deem necessary.

So, this week, the world may heave a sigh of relief that Turkey didn’t attack the Israeli and Greek ships, that Libya continues on a low fire, that Syria’s war is still contained within Syria, that Saudi Arabia is so far holding the line in Yemen, and Bahrain, though noisy, is still stable. and that Iran won’t use nuclear weapons at least while Ahmadinejad is in New York.