Meantime, the crisis in the Middle East continues, though at a slightly lower threat since Turkey’s Erdogan has been temporarily bought off:

Turkish PM Erdogan didn’t start WWWIII in the Middle East by attacking Greece, Israel, NATO and US. In fact, after a nice closed-door meeting with US President Obama, he turned into the facsimile of a reasonal leader. Instead of attacking, he sent his warships to mark off his own territorial waters and leave others to theirs. In addition, the subject of banning Israel’s participation in the missile shield (anti-Iran) has just slipped his mind for the time being.

Not only that, he bragged about enforcing the arms embargo agains President Assad of Syria! Who knew?! (And still no one really knows!). But low and behold, he is buying a whole bunch of US drones to use in his fight with the Kurdish separatists and NO one will object to the illegal occupier of Northern Cyprus stealing any gas he can find off its shores!

Before PM Erdogan began to play nice, he dabbled in the Egypt/Israel/Palestinian melee, adding a little money and backing to convince Abbas that he is invincible and can dare to defy the US, his former boss and paymaster. Thus the leader of the PLO (now commonly known as the Palestinian Authority-PA) rose to the occasion and gave a rousing hate speech in the UN, carefully using all the propagandist’s and post-historian’s favorite key words to bring the ignorant in the audience to their feet. Those who knew what was coming saved themselves the ignominy and left the hall. 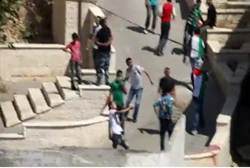 Rocks are deadly implements of death when thrown. They are used against Israeli civilians on a daily basis as a political force by the PA.

The end of it all? A formal request for approval of full membership for a Jew-free Palestinian State — first to be recognized along 1967 borders, later along 1948 borders and ultimately in all the land currently known as Israel today. (Anyone interested could see it by the map he uses to represent his nascent state.) This request will maybe get lost for a while in the huge bureacracy known as the United Nations for some unspecified amount of time. However, there are reports that the Security Council will meet to discuss what to do with it. Nothing is certain except continuing terrorism to convince those who haven’t yet decided to given Abbas their support.

In addition, Mr. Abbas kindly made it clear for all to hear — no need for right-wing media to accused him unjustly, that he will NEVER recognize a Jewish State in the Middle East. So it’s not only his little Palestine that must be judenrein, it must be the whole Middle East. Not only did he state this clearly, but he refused to sit down with Israel to negotiate as the Quartet demanded because of the Jews who currently live in the land he claims for his State-in-the-Making. After all, he now has Turkey at his back; he doesn’t need US money (some of it was just wasted anyway buying all those American flags for the burning ceremonies.)

The war against the terrorists in the Sinai that was to be conducted by Egypt recently has fizzled. Perhaps it was indeed only a headline intended to get permission from the Israelis for an significant increase of troops and tanks into Sinai. That was indeed the outcome. However, Israel still must defend its border with Egypt at Sinai as a defense line against enemy incursion. While only some of the terrorists involved in the previous attact near Eilat were Egyptian soldiers, it’s not unlikely that on this pretext or that, an Egyptian unit could attack across the border. Hamas and Al Qaeda roam freely there with large outposts in the mountains. Given the harsh terrain, Egypt couldn’t have cleared out those terrorists anyway.

However, Israel is in a more precarious position now. If it responds agains Egyptian military (and some WERE killed in the lsat attack) there would be a grave international incident. Following the ‘paid’ protest and ransacking of the Israeli Embassy, the military rulers are on notice that they cannot conduct business as usual with Israel. They are also on notice that the Islamic Brotherhood and other radical groups intend to take over Egypt. For that reason there has been some rearrest of free extremists and the military rulers are not being accused of “Mubarak-like” illegal arrests. There is unlikely to be any stability in Egypt for the forseable future and this means that terror groups will take root there. Saudi Arabia has already taken over as leader of the Arab world. Iran will fight against any influence of moderation and will empower Shi’ite terrorists on any battlefield, political or actual.

Nothing has changed except that the number of demonstrators willing to brave death in the streets has significantly decreased. While Saudi Arabia is still backing the rebels, Iran has taken an active hand in Assad’s strategy, knowing full well they are not only fighting for Assad but against Sunni incursion into their territory and Iran’s continugous access for Hizbollah. Until Erdogan’s little confab with Obama, he was sort of leaning toward what he perceived to be the winning side: Assad. So, though he is now joining the weapons embargo against Assad, he could very well switch sides again if Obama forgets to grease his palms sufficiently.

One point of interest is Turkey’s break with Iran as made clear by it’s break with Assad. Since both Turkey and Iran have been fighting the Kurdish separatists, their cooperation on that front has been fruitful….up to and including US assistance provided to Turkey having the ‘intended or not’ effect of supporting Iranian attacks on the Kurds in Iran & Iraq. The war against the Kurds is quite likely to be a bargaining chip for Obama with both Turkey and Iran, this possibly influencing the support (or not) of the Syrian president. With Saudi supplying support and arms to the Syrian rebels and with the US, Turkey and Iran negotiating around the edges, the Syrians will continue unimpeded in their slaughter.

There is so much propaganda covering this civil war, that it’s unlikely that even the western intelligence services have a handle on it. One day the rebels claim to have conquered a Qaddafi city, the next day they are asking NATO to bomb it for him. Perhaps they credit most of the world with dementia: Maybe they won’t remember the headlines of yesterday when they see today’s?

Where is Qaddafi? What WMD are the rebels claiming to have found? That in itself shouldn’t be surprising. Qaddafi was working hand in glove with Saddam Hussein to develop WMD and a nuclear bomb IN LIBYA. Qaddafi then claimed to stand down and give it all to the US at the beginning of the Iraqi invasion, but who knows? He probably saved some for a special occasion. (Syria is likely to have some of those, too. Is THAT one reason NATO isn’t bombing Assad’s territory?)

It’s a good thing Saudi Arabia has a lot of Princes: They are spread pretty thin just now. They have set up a replacement for the old Arab League, usurping some of Egypt’s centrality in Arab Affairs. They are protecting the throne of their new state, Bahrain, and they are funding and arming the rebels in Syria to gain a toe hold there while poking Iran in the eye in both situations. Yemen is an open sore on their border and they are doing their best to get control of the political machine there. Lacking cooperation from the ruling family, a little coercion has been in order.

Saudi’s King has made it clear to Obama that, while they don’t trust the US and are making moves to provide for their own defense, they will cooperate when it suits their needs. And this it does, in Yemen. Saudi Arabia has approved a new and updated CIA station near their border with Yemen in order to control Al Qaeda. This will give the Saudi’s a freer hand in bringing at least a critical part of Yemen, if not all of it, into their orbit.

The faded Prince Ahmadinejad came to New York. While he framed his usual lies with his usual vitriol, his royal robes are gone and the world has noticed. The Ayatolas are retaking control and soon, with the coming elections, another will take his place. It will be interesting to see if Obama’s overtures (some of which were able to turn the Prince’s head) will be able to convince the Ayatolas. Stopping nuclear bomb development no longer seems to interest Obama who wants to be seen a ‘partner’ of Iran. However, so far, his ideas for cooperation are been rejected out of hand: What they demand, he cannot supply. For starters, they want the Saudi’s out of Bahrain. Since Obama can no longer tell the Saudi King what to do, it seems he is back at square one.

Much is being made of the implementation of the delivery of bunker busters bombs (so-called) by the US to Israel. These are ostensibly for bombing Iran’s nuclear development sites. Initially (when first ordered), they might have been effective for that. However, the conclusions seem to be that they can’t go deep enough to penetrate the really important mountain caves in use now. In any case, when it was crucial for the first shipment to arrive, it was diverted by Obama to punish Israel for not doing as he wanted. (Does the US administration — in now publishing this really “PRO-ISRAEL” delivery — really think no one will remember that?) So, it’s doubtful Iran is now very worried about these bombs.