Sunday Israel and Hamas revealed the names of 477 Palestinian prisoners to be released.    This will begin the first stage of the prisoner exchange. The remainder are to be released after Gilad is transferred to Israel.  But it must be pointed out:  Gilad and the PA prisoners were not all judged and sentenced to prison for equal crimes. This is NOT an  equal trade between Gilad and the terrorists. And we do not refer to the number: 1027  for  1.

Among the 477 PA prisoners in the first release are many who directly murdered Israeli civilians  — not in self-defense and not in battle: In a pizza shop, in their homes, in a hotel, and so forth.

On the other hand 20 year-old Gilad Shalit was kidnapped during an ambush of his patrol INSIDE Israeli territory by terrorists operating from Gaza.  They came from within “their own territory” into Israeli sovereign territory.  They were not attacked, 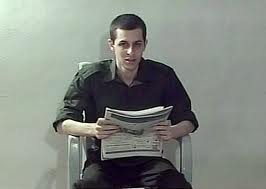 Kidnapped soldier Gilad Shalit holding a newspaper to prove he is alive in Hamas custody.

nor were they being threatened. Gilad Shalit was kidnapped to be held for ransom.  He was held in isolation, underground, with no contact from the IRC or other agents, for five LONG years. For a long time there was even no proof of life given to provide hope to his family. Over five years his family received three letters, an audio tape, and a DVD for which  Israel had to release 20 female PA convicts.  NO ONE YET KNOWS how he was treated, what he suffered during that time.

Would that no murderers ever be traded to redeem the innocent:  But it’s neither black nor white.  Most civilized countries refuse to ransom kidnap victims.  The country then pays the price of watching it’s own slaughtered – sometimes beheaded, on TV and Internet screens around the world. The families pay the price many times over for the rest of their lives.   However, paying a ransom encourages kidnappers. So they say and so it is.

It is more difficult in Israel because it’s a very small country in land and population. It’s like an extended family. Everyone knows someone who knows someone who knows or is related to the family in such a tragedy.  When a attack happens almost everyone is within a driving time of from a few minutes to 3 hours. When a bus blown up or a restaurant is bombed, the whole country comes to a halt. Cell phones no longer work as the system is overwhelmed with people trying to locate loved ones who were to be in that location. Hospitals set up special phone lines that are often overloaded and all media is focused on the attack.  Normal life and work comes to a stop while everyone who can watches and informs those who can’t. No one is untouched which fulfills the precise definition of terrorism and intent of the terrorists. All are praying that there are no dead or maimed and watch helplessly as the numbers rise.

So, it was with the ambush and when we were informed that one soldier (or civilian) was kidnapped. We all mourned the dead and injured and became Gilad’s family – and the terrorists know it.

Where then does that leave us? What are our alternatives?

On the personal level:

Gilad is coming home bringing if not a complete and immediate end to his suffering, at least relief to be in the warmth of his family whose whose own suffering has been agonizing over the last 5 years. The healing for him and for them can begin. Who doesn’t feel the pain of this soldier and this family?

On the national level:

Soldiers who risked their lives to capture the murderers of Israeli civilians, men, women and children, will now be free to kill again, even to attack those very soldiers and their families. Hamas and other terrorist groups have already announced that they will seek more soldiers (and/or civilians) to kidnap. So other soldiers, other families are at an even greater risk. Who doesn’t feel the frustration and pain of the soldiers who captured these murderers and the survivors of those whose blood was spilled.

And how will people at both levels feel when the next murderous attack comes, on another bus or in a restaurant or or in a school?

Where is the balance here?  Which is the highest moral value? Which is the best decision for Israel and for Jews  worldwide?

We are paying a very high price and we will feel no assurance that it will be honored until we see Gilad in the doorway of his home.

Was there no OTHER way to set our captive free?