Under cover of all the smoke billowing from the much-heralded but not exactly ‘long-range’ missiles in the Strait of Hormuz, what’s going on?

The newspapers are filled with pronouncements by high-up and sometimes rival Iranian officials.  Their message, a savage, world-shaking threat:  No more sanctions, no interference in Iran, Syria or their other international activities or they’ll cut off the oil shipping lanes to the west.  They are meanwhile, arming Hamas, pulling the strings in Iraq, and in all other ways possible attempting to spread Shi’ite control over the Muslim world.  Each time they raise the sword, note that they offer negotiations. It’s a fine — and very successful — act to keep the western powers off-balance until they, Iran, are ready to make their move.  It’s just not possible that the western world leaders and their ‘intelligent’ intelligence institutions are so easily wound around the Iranian finger, is it?  It would be nice to think that these leaders themselves are operating under a smoke screen to weaken Iran.  If so, there’s no evidence of their success to date! (au contraire!)

However, while world powers are fighting a battle for control of energy resources for survival of their economic systems, the Muslims are struggling to build a single religious, social Islamic power. For them the oil is a means not an end, but a means to reach that goal.  Hamas chief, speaking after a meeting in Tunisia with so-called moderate Islamist PM Hamadi Jebali:  “Palestine is not a banner that we brandish like nobody’s business. It’s a religious and nationalist commitment,” Haniyeh said. This terrorist leader was there at the invitation of the Tunisian PM! Apparently not all ‘moderates’ are moderate!

Oil as an energy source and economic engine is a central part of their strategy. They believe that whoever controls the oil will have the rest of the world by the throat! Who can say they are wrong?

Indeed, the world needs to put aside the current ‘political correctness’. They need to look underneath the smoke rising from the gulf waters, beyond the Iranian media show, and specifically examine the religious motivations and manipulations of the Iranians.  The insurmountable obstacle to Iran’s military conquest has been the bloody Sunnis and Shi’ite war for Islamic religious supremacy.   The effects of it are most obviously played out between rulers, often on the soil of other less powerful Muslim countries. An widely-publicized recent example is Sunni-led Bahrain  who officially came into the Saudi King’s fold in order to escape the encroachment of Iranian directed Shi’ite forces.   In today’s news is the struggle is taking place in Syria,  where the Saudis Sunni leadership has organized Arab support for the opposition to Assad,  an Aliwite minority leader is aligned with Shiite Iran. This internecine war is also significant in the Afghan and Iraq wars (neither over, in contrast to popular belief).   The Russians and Chinese, on the other hand, are taking advantage of the opportunity to arm the various sides in order to use them as proxies, in accordance to their own plans for control of these oil-rich nations. 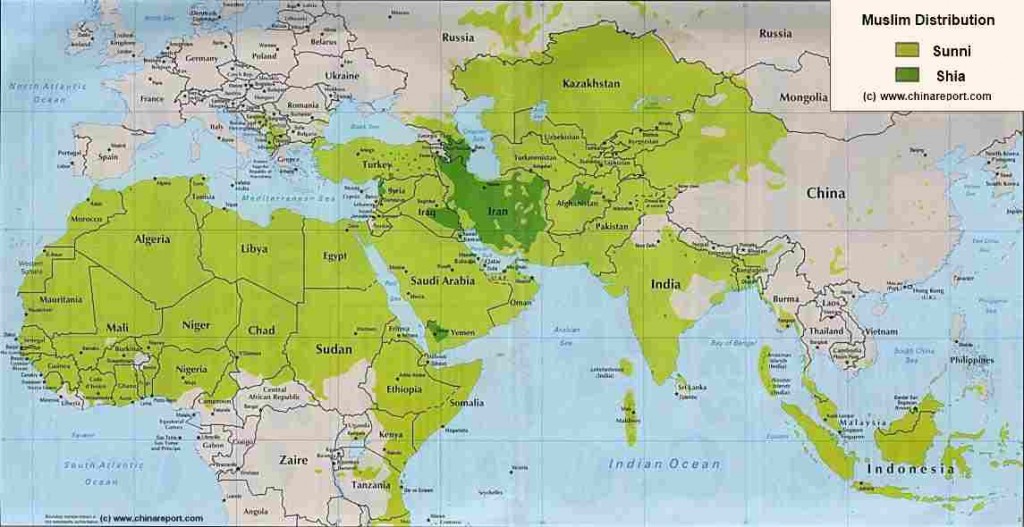 While the two main sects of Islam fight over control over national governments, there are major power struggles within each division, i.e., the extremist Sunnis (Wahabi sect = Al Qaeda) and extremist Shi’ites (Hojjatieh sect = promoting chaos to bring the Al-Mahdi – the 12th Imam). These are the most dangerous to the west as evidenced by their world-wide terrorist activities and their efforts to control unstable nations (Sudan, Yemen, Cairo, Libya, Lebanon, among others).  Iranian extremist leader Ahmadinejad is suspected of belonging to the Hojjatiehs and certainly heads a religious-ideological wing which promotes the chaos sought by the Hojjatiehs. Of late, however, it appears that the Supreme Leader, Ayatollah Ali Khamenei, has been stripping Ahmadinejad of his military power. This conflict is still a conundrum hidden somewhat under the bellicose smoke screen. There is no obvious outcome and no proof of the direction the winner would take with regard to instigating world war.

Other countries (in addition to those whose governmental structure has been torn apart by the mobs) are struggling to maintain some stability. While Turkey has hopped from one side to the other and is now slightly leaning toward following Obama (who is leaning toward the Muslim Brotherhood in Cairo and Libya), it behooves NATO leaders to look closely at the religious rivalries within Turkey.  Turkey’s past as a western-oriented secular country has been badly shaken up by the emergence of PM Erdogan as a radical leader who envisions himself as the world rule of the Islamic Caliphate. Whether Erdogan continues to hold power in Turkey or not, the Arabs did not welcome him as the ruler chosen by their messiah. No one even knows the direction Turkey will take and not even its near future.

So, dangerous as playing with weapons and extremists may be, we mustn’t get exclusively focused on the smoke of the missiles or the threats to close the strait of Hormuz. We have to keep our eyes on the who is winning the power struggle going in every major Islamic nation.  The current US administrations negotiations with the Muslim Brotherhood and other terrorist organizations will only strengthen them. Thus West will instead betray the effort of those truly trying to find freedom.  It will instead take them from enslavement to dictators to bondage under Sharia law, as brutally enforced by agents of terror who wield its sword. (see A Different Kind of Tyranny)

The current struggle in the Middle East is NOT really about poverty or ‘social justice’.  The hunger and poverty of many in the streets is being used as a hammer to smash the structure of the rulers. Beyond that, it is of no interest to the Islamists.  Their suffering is just a tool used to create another smoke screen.  But, these revolutions are not just about political power in and for itself: Many of the hard-core agitators are ‘real believers’  intent on forcing a Muslim Caliphate on the whole world.  This is NOT a conspiracy theory, this is the basis for the victory of Islam as a major world religion.  This they will hide under a professed moderation, using the terms of the West to confound and confuse their enemies: Democracy! Freedom! Social Justice? These are empty terms provided to them by delusional international elitist socialist and communist organizations. These organizations kid themselves that in manipulating the poor and afflicted, in overthrowing the powerful, dictators they will create a chaos out of which they themselves will take control.  These deceivers are themselves deceived!

Whoever wins this struggle will determine the future of the entire world, effecting not only our standard of living, but whether we live in freedom or in servitude, and yes, even the survival of our planet.

There is just the smoke for now. The fire is yet to come.