Ignorance is No Excuse #6

Is Israel a Warmonger?

How can anyone seriously ask that question?

Why on earth would anyone whose home is essentially on the front lines want to start a war?  Consider:

The talking heads dramatically proclaim: “Israeli will not inform the US of an impending strike on Iran.”  Oh, those bad Israelis. Never mind that at the very top of the American hierarchy, the President himself announces repeatedly and publicly that Israeli will attack and when, making sure all who hear know that

Ergo, HE is the only one who can save the world and save Israel and it is really Israel who is the loose canon in the Middle East.

The American President and his administration spew forth the notion that there is plenty of time for diplomacy, a year or more before any action must be taken. Then the administration pressures Israeli officials to make public statements to support them (to prove how pro-Israeli they are, perhaps? Don’t forget the 2012 election is coming up!) And some Israeli’s are weak enough to toe the line!

That’s the message being  broadcast in the US while in Israel we watch Iran’s ‘atomic clock’ ticking.

Israelis listen to the daily rants broadcast from Iran extolling the imminent total destruction of Israel. In addition, the Iranian Defense Minister now says that they won’t “wait to respond to an attack”.  Translation:  “We intend to strike first!”

Who do you believe?  Consider:

All of these weapons are available to any rogue government, revolutionary or terrorist group that can take them, including Al Qaeda cells.

The anti-Israel news media, US Admin,  EU, UN  and other international politicians, students and leftists are shouting that Israel is militaristic, a war monger, thirsting for action?

Is that what you believe? Consider: 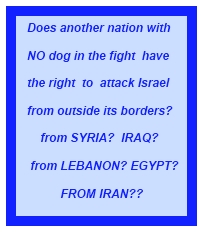 How can a nation defending itself be a war monger?

Israel has a people’s army, a national draft. This army’s organization permits

None of these are controlling factors in Israel’s military structure.  It is named the Israel Defense Forces (IDF) and it’s sole purpose and reason for existence is exactly that:  To defend the State of Israel¹  on behalf of every soldier’s home, parents, sisters and brothers,wife, children, cousins and neighbors.²

Ask every responsible economist in the world and they will tell you that the Israeli economic success would be greater without the huge drain placed on the national budget by defense expenditures-4.85 percent of GDP, equal to 11.6 percent of the state budget³.  Many social issues in Israel would be at least partially resolved if the expense for defense could be reduced. In addition, as in other countries, R&D resources currently devoted to military needs would be added to the very successful industrial R&D  enterprise in Israel.

In addition, ask every Israeli reservist who must interrupt his studies, career, and family life for a minimum of 30 days a year to serve in the reserves. This continues until age 40. Does he really want to go to war?

Do you really think this is the life the founders of the state envisioned for the next generations? They were trying to set up an agricultural lifestyle working the land, raising animals, growing crops. They wanted a militaristic society?

It’s understandable, perhaps, that it may be very difficult for Americans and Europeans to understand and identify with Israelis, even if they are sympathetic to the existential dilemma Israel faces. It’s hundreds of years since they began to build or rebuild their societies. Most of them no longer have a national draft. But at least some of them ought to remember what it was like to defend their land, society and culture during the 2 world wars and the cold war?

Until 9/11 most Americans thought of war in the Middle East as far away, between foreign peoples who cut off the heads of their enemies or stoned women in public on a regular basis.  However, 9/11 suddenly showed  that a brutal force from that same Middle East could attack the homeland. Even though shock  and emotion seared a new awareness into the psyche of most Americans and the western world, for many, terrifying and threatening as it was, it was not on every doorstep.  Many families sent husbands and sons to hunt down that cruel enemy and the distant Middle East suddenly came closer. A war was once again on the American newscasts. The fear of terrorism was awakened and with it a realization that harm can invade their lives, perhaps on a plane, at a shopping center, a church or a political rally.  Yet still, at home, they felt safe.

What do you think? Were the Americans then warmongers?

They carried the war to a far away enemy in order to prevent attacks on their country. Only the extreme left would  deny the US the right of their attempt to catch the perpetrators and prevent another threatened attack.

If your answer is no, then Israel too  is NO warmonger!

The enemy of Israel is within and without, near and not far.  An attack can reasonably be expected to occur in our bedrooms or our living rooms as easily as on a bus or in a hotel or restaurant. In Israel, even since the beginning of the legal settlement of the land, there has been no sense of safety.  Home, the children’s kindergarten, the office, the restaurant, the public bus, the synagogue, the school, the lunch room at the University, and even the roads and byways have been and will be scenes of brutal attacks on men, women, children, grandparents, and infants. No one is immune, there is no safe place. But there are those who would dismiss this and deny Israel the right to exist at all.

Does that give another nation, another state with NO stake in that argument the legal or moral right to attack from across national borders?  From Syria? From Iraq? From Lebanon? From Egypt? or from IRAN? I can’t think of any law on any books that permits them to do so. They have NO dog in the fight. Their only excuse is the ancient Islamic and Nazi-induced anti-Jewish vitriol. Perhaps you have read of  the Arab visits to Hitler? You don’t know anything about this collaboration? Then you have a serious hole in your knowledge of one of the direct causes of current events–Current events that could escalate into a nuclear world war in your time.

Yet amazingly, in Israel, on the surface, life goes on ‘normally’:

Peace? Even in a period of relative ‘peace’, missiles fall on homes, schools, fields and streets, frequently, without warning, day or night, weekday or Sabbath. This is the reality that every Israeli, liberal or conservative, lives with every day of our lives.

Israelis work hard, often long hours, study, socialize like everywhere else.  They are indeed far more politically aware and far more involved in the day-to-day social and military situations arising, if only on a discussion level, than the average citizen in other countries.  A  subconscious alertness, dormant until a siren goes off, the news is interrupted, or a telephone call brings back reality with sudden brutal fear.  Then the cell phone networks fail as everyone calls friends and family to reassure themselves that they weren’t injured and emergency personnel report for duty.  Israel is a small country – it has happened more than once that when the emergency crews arrive, they find a loved one or friend injured or killed.

That’s everyday life in Israel. Yet in an international survey, it was reported that on the whole, Israelis are happier and more satisfied with their lives than in other countries.  Maybe that’s partly because we are focused in spite of all, not on war, but on peace.  And yes, even with our fathers, sons, brothers and sisters all serving in the army — on the ‘front’ of the front lines.

Do you still think Israelis are warmongers? Do we want war?

No! We do not!  But we do want to survive and we will defend our right to do so, here, in this place and in this time.

The main doctrine consists of the following principles:

²Anyone who wants to disagree, citing the taking of Jerusalem and so-called Palestinian land west of the Jordan River should study history and international law very well before reciting the propaganda of those who would rewrite history and dismiss the law. You are referred to, among other articles and links available,  The Legality of Israel’s Existence and the Ignorance is No Excuse #1-5,  an ongoing series of articles.

³ An additional ~4% in US military aid is received, 80% of which must be spent within the US for US product, thus also strengthening the US military enterprise.