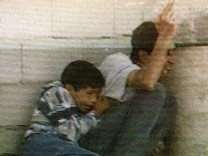 Mohammed & Father crouched behind a barrel

The Paris Court of Appeals, which had overturned Karsenty’s libel conviction in 2008, convicted Karsenty on Wednesday and fined him
about $9,000 in his long-running case against the France 2 station.

Karsenty called the verdict “outrageous,” while a lawyer for France 2 said it was a victory for journalists, according to The Associated
Press.

France 2 and its Israel correspondent, Charles Enderlin, sued Karsenty for defamation in 2004 following his claims that a video report by
Enderlin on the killing of 12-year-old Mohammed al-Dura in Gaza in 2000 was doctored.

Karsenty claimed the footage of al-Dura crouching with his father behind a barricade as bullets whizzed overhead was a hoax. The footage
became an icon of the second Palestinian intifada….. …

In returning the case to the appeals court, the high court said the appeals court had overstepped its bounds in ordering France 2 to send it
the rushes of the report, according to the French news agency AFP.    [JTA News Brief]

Philippe Karsenty presented his point of view just prior to the ruling in the June 22nd  Jerusalem Post Article “Thanks to Kuperwasser al-Dura report, truth is on its way“. 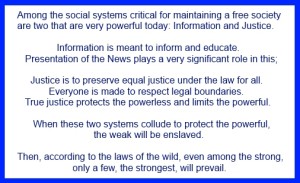 Role of Information & Justice in a Free Society

Once again an injustice is done in the al-Dura case.  The French High Court in overturning an appeals court ruling has convicted and fined  Phillipe Karsenty of defaming France2 News.

In denying his right to access all of the original footage in order to prove his case, the effect is that a news organization is permitted to film a ‘performance’, present it as news and any parties harmed by such will have no legal recourse to exam all original footage to prove the lie.

Today’s news organization: Is its purpose to INFORM the public or is it to FORM public opinion? The answer is no longer obvious.

This ruling seems to say that there is no defined ethical public responsibility to publish the facts and truths insofar as they can be known. The ‘freedom of the press’ appears to be an unlimited ‘freedom to defame’, including use of their influence to color a news report with their own ideology, to hide, create, or distort the  facts and even insinuate bold lies into the story.

This can be done quite easily today by altering photos, creative video editing, or changing a word or two in a quotation. Unfortunately, for many publishers, editors, and reporters,  their ‘for-the-greater-good’ end justifies any means. They intend to conform the world to their own view of paradise  regardless of  immediate and lasting injury to any party – individual, national or international.

By abusing  the power of the TV screen, the front page headlines and news blogs, they accomplish two things: 1) intended – they convince the naive and uninformed; 2) unintended – they lose the trust of those who seek the truth.   The need to close off other avenues of knowledge to the 2nd group may one day be used to justify government control of the news in countries where it is currently ‘free’.

Are they so blind? Do they not see that by abusing the right given them to find and print truth, that very ‘right’ may be lost,  subject to the whim of those who hold power:  Heads of State, Parliaments and Justice Systems?

ISRAEL –   UPDATE:    Doctor: Here’s Why Mohammed al-Dura Really Died
Israeli Doctor who was exonorated in France after proving Mohammed al-Dura’s father lied about his injuries, explains what happened to Mohammed as-Dura and Rami al-Dura and why the time line didn’t make sense. Summary: Mohammed was already dead and Rami (crouching with his father) wasn’t killed by anyone. See link for full story.

Finally, an official Israeli report on the ‘ al-Dura incident’ has been published, although it has come so late that lasting harm has been done.  Everyone has apparently decided what s/he believes. No further information, barring a live ‘boy/young man’ or new hard evidence of death, its cause and identification of the body will change any minds.

In my opinion and according to this report, this was a  “Pallywood” production with the local and French press as willing accomplices. The Palestinians’ “Pallywood” staff work hard to present Israel to the world as a terrorist nation who murders women and children. The intended audience, by and large, is still inclined to believe newspaper and magazine reports,  photos and, even more so, on-line video clips ‘from the front lines’.

Even some foreign reporters have admitted to being intimidated by locals during clashes. In other cases, reporters have been known to encourage rioting/stoning, as they stand behind the perpetrators to film the ‘action’. The Jerusalem Post reported: 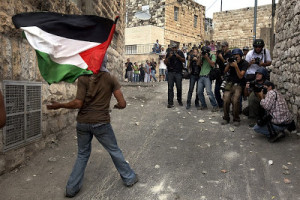 Some western journalists have been warned not to work with Arabic speaking reporters who fail to toe the     “All-  Occupation, All The Time” reporting.  This is how the PA controls not only their own media outlets, but those western outlets.  All too many simply play along rather than stand up for press and speech freedoms and  possibly risk losing access.

For those journalists who behave and report primarily about the occupation, the rewards are access to senior officials.  Senior PA officials told Arab Israeli journalist abu Toameh, “Even the Jews at Haaretz behave themselves and for that they are rewarded with interviews of PA President Mahmoud Abbas.”