Turkey refuses to participate again this year in joint US-Israel-naval exercises in the Mediterranean Sea, a project they had been part of in past years. Turkish PM Erdogan is demanding that Israel apologize for the deaths of the terrorists on board the Miva Marmara, infamous ship in the 1st so-called Gaza Flotilla. 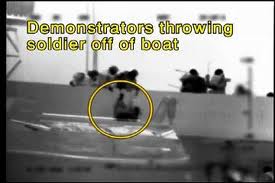 In diplomatic circles in Israel, the US and Europe, there is divided opinion on this and they are all working overtime to find a way for Israel to ‘sort of’ apologize so that Erdogan and his Muslim terrorist supporters can save their honor.  However, not even all Turks agree with him.  All of his military leaders have ‘resigned’,  been fired or retired in light of their rejection of Erdogan’s policies and the rise of Islamic power in Turkey, a normally secular state of mixed religions. They also object to his realignment of their nation with the Arab nations and new distance between Turkey and the EU, not to mention the US and NATO.  These last two memberships were once prize plums for the Turkish military, industry and society.

Turkey’s historical western tilt had also given it an advantage in some alliances over the Greeks in issues of conflict.

Now, Greece is filling Turkish shoes in relation to both Israel and, in military matters, the US.   Erdogan 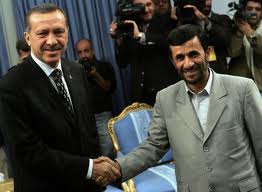 thought he could make a big impression on Pakistan, Syria, Hizballah and Lebanon, giving him the ability to successfully challenge Iran’s power in these States.  It would also have given him an open door to Egypt and Hamas as a negotiator with Israel.

Problem was, in his arrogrance, he thought he could go toe to toe with Israel and come out the winner.

Now, in demanding that the defender apologize loudly and publicly to the obvious aggressor, the Turkish PM has backed himself into an impossible corner.

He didn’t win his bout with Israel and he hasn’t received the demanded apology. Now the UN has graciously delayed issuing the report on the Marmara to give Erdogan time to save face since, in this report and the eyes of the UN, Israel  is indeed found blameless.

In addition, in taking a public stand with Pres. Obama (probably thinking Obama could pressure Israel), he appeared to again align himself with the West and with NATO — who was then bombing the life out of Libya!

He  then tried to use the US to back him in a military adventure in N. Syria.  However, his military leaders were now in rebellion and the movement of Turkish troops to the border put him in direct conflict with Syria, causing Iran to issue a strongly worded warning.

Now Syria is angry with Erdogan and Iran has backed him down with threats which include his US backer, Obama.  Here too, he had to sheath his sword, as did Obama.

Finally, by flirting with Hizbollah,  Al Qaeda and  the Muslim Brotherhood while loudly declaring his support for Hamas — which set him off on his first (unsuccessful) adventure, Erdogan has succeeded in only one thing:  to alienate every side of every significant Middle East conflict and show himself as an unreliable partner for the West and anyone else. 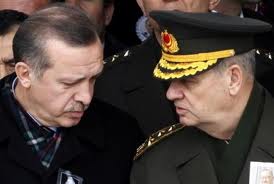 Erdogan tries to calm the generals

It appears that the outstanding characteristic of Turkish PM Erdogan and his government is his arrogance in thinking he could manipulate leaders and replace Iran, Saudi Arabia and Egypt, becoming the major force representing the Muslim world against the non-Muslim world.  His policies and diplomatic thrusts have so completely missed their mark, his failures have been so public and, in corridors of power, so humiliating to Turkey, that his military won’t back him and in the last election  he lost the majority he needed to solidify his power grab in Turkey. Meanwhile, as long as he is in power, he is a significant troublemaker and one more chaotic force in a very sensitive region crying out for stability.

So, what on earth could Israel gain by apologizing to Erdogan for the fact that all the Israeli soldiers didn’t surrender to slaughter on the high seas? So that Israeli Defense Minister Ehud Barack can continue to sell arms to Turkey?

Is it true that PM  Netanyahu is trying to find a way to save face while apologizing?  Does Israel want to buy Erdogan’s ‘friendship’? Since when did it ever pay to bribe an arrogant bully.  The principle is the same, whether it’s the kid down the block or the Prime Minister of Turkey.  The best Israel can do is to continue to develop good relations with Greece and wait for the Turkish people to get sick enough of PM Erdogan to replace him.

Israeli citizens know the Turkish street. They have had good relations with Turkish citizens for many years and historically.  But Israel cannot insult the Israeli commandos who faced down the enemy on an extremely difficult battlefield; Israel cannot go shuffling in hat-in-hand to beg forgiveness from the terrorists on that ship nor from the one who officially funded and sent them. No self-respecting nation would do such a thing.

If this small nation Israel doesn’t show self-respect when it is legally and morally in the right, neither will any other nation respect it.

That would be the way to ensure a long line of Erdogens waiting at the door!

10 Responses to Apologize to Turkey?