Ignorance is no Excuse #3

The PLO aka Palestinian Authority, its leader Abbas and his henchmen only want a small peaceful state along the pre-1967 borders. 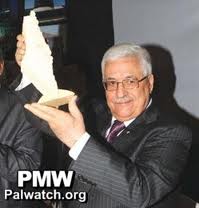 Evidence to the contrary? There’s so much, it’s hard to decide where to start, what to put in and what to leave out. Certainly no person who really wants to know the truth doesn’t already know it and doesn’t need this blog.  So, is it possible to ‘inform’ one who  doesn’t REALLY want to be informed?  Probably not, but here goes…

Take a look at important parts of the PLO National Covenant of 1964, amended in 1968, and still the effective foundation on which decisions are taken and policies established yet today (see end of article for references). 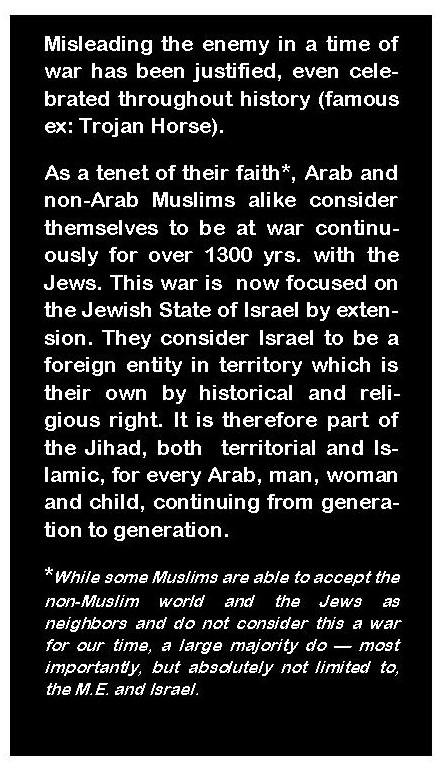 then Jordanian-ruled eastern Jerusalem. It basically stated the aims of the organization. Another document known as the Basic Constitution or Fundamental Law of the PLO was approved as the basis for structure and procedures. Changes were made and articles added: Following the 1967 war when Israel took the whole of Jerusalem and the western bank of the Jordan river from Jordan,  some specific changes were made which more narrowly defined people who would be known as ‘Palestinians’. At this time “Jews” who from before the time of the British Mandate had been included in the category of  “Palestinians” were removed.

The initial articles  call for Palestinian unity in armed struggle, deny the legitimacy of the establishment of Israel, deny the existence of a Jewish people with a historical or religious connection to Palestine, and label Zionism a racist, imperialist, fanatic, fascist, aggressive, colonialist political movement that must be eliminated from the Middle East for the sake of world peace.1

The argument is put forward with “proof” (including a large number of conflicting quotes from letters and public declarations, some by Arafat himself to President Clinton, and in official documents given to the US and the UN as part of various negotiations). These state that the Covenant has been changed and these provisions eliminated. But in fact, all are verbal and written communications in English translation and  disputed by the fact that the original charter of 1968 remains unchanged and in force. This is testified to by Arafat in the following statement:

The text of the Palestinian National Covenant remains as it was and no changes whatsoever were made to it. This has caused it to be frozen, not annulled. The drafting of the new National Covenant will take into account the extent of Israeli fulfillment of its previous and coming obligations… evil and corrupt acts are expected from the Israeli side… The fact that the PNC did not hold a special session to make changes and amendments in the text of the National Covenant at this stage… was done to defend the new Covenant from being influenced by the current Israeli dictatorship.2

So, though some changes were even voted on  (in 1996, even voiding the part that denied Israel’s right to exist), the text of the legal charter was never changed. No matter how many times in the light of the cameras and presence of Prime Ministers, Presidents and the whole world, it is stated that they recognize Israel, nothing has changed and certainly no specific borders for an Israeli  state in the territory of “Palestine” have ever been described or approved in the charter.

Palestine (Arabic: Filastin/Filas??n/Falas??n/Filis??n), officially declared as the State of Palestine (Arabic: Dawlat Filastin) is a state that was proclaimed in exile in Algiers on 15 November 1988, when the PLO’s National Council (PNC) adopted the unilateral Palestinian Declaration of Independence. At the time of the 1988 declaration, the PLO did not exercise control over any territory and its claimed territory remains under Israeli occupation. It claims the Palestinian territory and has designated Jerusalem as the capital of Palestine despite Israeli control.3

So, when Abbas comes to the UN waving a banner or showing a map of Palestine without the State of Israel in its place, it is clear that what it SEEMS to say is what it DOES say. He knows that many, perhaps a majority, just won’t believe he MEANS it. Sound familiar?

When the head of PLO holds this model and demands a PA state based on the 1967 borders, he is NOT saying ‘and forever limited to’ such borders.  For him, it is just one step forward in negotiations.  A:  ‘stop settlements’.  Israel stopped. B: ‘stop settlements AND 1967 borders.  C:  if Israel looks pressured and may give in to that, D:  add  the right of return.   He knows that whether Israel agrees or doesn’t he gets the message out to Palestinian supporters and they will pressure their governments, rioting in the streets and universities to achieve these ends.  But will Abbas (or the next PLO Chairman) accept an agreement then? NO, of course not. For then the next step is E.  push back toward the 1948 armistice lines. All along use Arabs living outside of the Israel to make claims for return and ‘return’ of land (which quite possible was Jewish-owned prior to the riots during the Mandate). 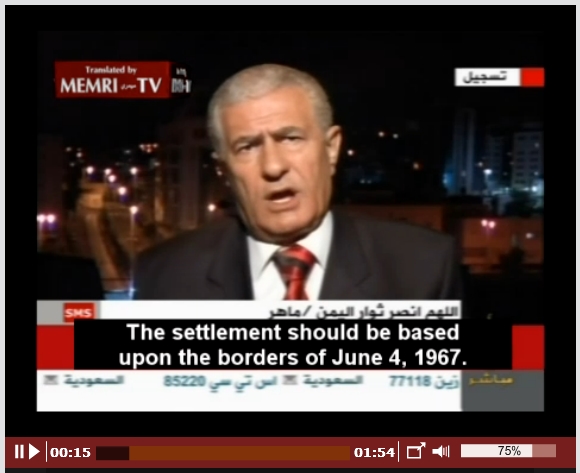 Abbas Zaki, a senior member of the Fatah Central Committee told Al Jazeera television on September 23rd that any negotiated “settlement” should be based on 1967 borders…..But listen further. Zaki then goes on to say, “When we say that the settlement should be based upon these borders, President (Abbas) understands, we understand, and everybody knows that the greater goal cannot be accomplished in one go.”

If at any stage along this line of negotiations, physical war seems profitable instead of  or alongside a renewed intifada, terror or assassinations,  then it too is always an option.  This will depend on how much money the PA can accrue and how strong a limit  the US/UN and EU place on Israel’s determination to fight back. It will also depend on the participation of Hizbollah, Syria, Iran, Jordan, Hamas and Egypt.  Anyone following the news knows that this is a matter of preparedness and opportunity, often instigated by a planned provocation.  Any and all of these stages can be re-ordered or skipped, so the time line is not clear. But this indeed the  direction and the goal, made even more obvious by the Palestinian State request documents submitted in September by Abbas to the UN.

Making false or deceptive statements (lying, in western parlance) is a strategic tactic in war — whether physical or diplomatic. Blatantly used and condoned in the East, it is secretly used and universally condemned when exposed in the West. But it is widely used in normal foreign discourse and in positions of power by both government and civilians.

Think about it this way:  Misleading the enemy in a time of war is justified by all cultures.  The Arabs consider themselves in a constant state of war with Israel as a foreign entity in territory they consider theirs, so they can’t be faulted if the western citizens allow themselves to believe and act on statements made or even documents issued during negotiations and under duress employed by foreign powers to try to force compliance with their wishes.

In addition, if those Western leaders who should know better build their foreign policy decisions on such actions or information, it is either deliberate self-deceit or intentional deceit of their constituents. YOU need to know the truth.

Therefore, Palestinians can’t be blamed if the  non-Arab, non-Islamic peoples choose to ignore or deny the existence of this generational state of war. And of course, it is understandable that the Palestinians call it a victory when people believe and base their own policies on PA statements made or even documents signed under duress that have no relationship to their real goal.  After all, in most cases the truth is easily discovered if one wants to find it.

At the UN to from the documents submitted by Abu Abbas:

This application for membership is being submitted based on the Palestinian people’s natural, legal and historic rights and based on United Nations General Assembly resolution 181(II) of 29 November 1947 as well as the Declaration of Independence of the State of Palestine of 15 November 1988 and the acknowledgment by the General Assembly of this Declaration in resolution 43/177 of 15 December 1988.4

It is notable that the letter gives such prominence to resolution 181, the 1947 “partition” resolution which recommended the partition of    Palestine without the consent of its indigenous people.4

The Palestinian Authority is telling its people that peace with Israel is not a goal. Instead, the PA says that all of Israel is “Palestine,” and that no compromise is acceptable because this principle is “the only red line.” This message was expressed by the regular cartoonist, Muhammad Sabaaneh, in the official PA daily.

Published this week, his cartoon displayed a map of all of Israel (excluding the Golan Heights) and the PA areas, with the following text written across the map: 5 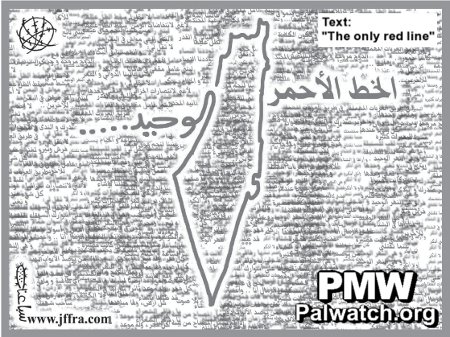 One Response to Ignorance is no Excuse #3