Why Israel Should Not Divide Jerusalem

If the US and Europe do not want the chaos of Lebanon, the slaughter of civilians as in Bosnia and the former Yugoslavia to occur in Israel; if they do not want world-threatening warfare as not seen in 70 years, they should think again about the desirability of dividing Jerusalem.

The article below from the Israeli newspaper Haaretz was written to increase awareness of the Israeli public to the importance of upcoming decisions on the status of Jerusalem. The impending Israeli elections will determine the policies of Israel with regard to the “Land for Peace” issues on the table — and to the very existence of Israel as a State. 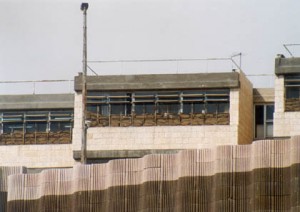 School in Jerusalem with walls to protect from snipers. Photo: Ministry of Foreign Affairs - Scoop 80, 2000

However, it’s not only voting Israelis who need this information: Millions of supporters of Israel around the globe need to know the facts. There must be no pressure on Israel to take decisions that will bring about national suicide — or a 3rd world war. Natav Shragai wrote in an article entitled “THE PUBLIC HAS A RIGHT TO KNOW” that “the day after a new government is formed in Israel, the issue of Jerusalem will come up again.” Now, with Obama in the White House, it is uncertain what kind or amount of pressure will exerted on Israel and on the issue of Jerusalem, in particular. He noted that “25 years ago lashed out at the U.S. ambassador to Israel, Samuel Lewis, telling him Israel was not a banana republic and that Israel would make do with bread and margarine if necessary, but would not accept dictates?” What the news media in Israel and abroad never mention is the proximity of Arab neighborhoods to Jewish neighborhoods, especially within and around the city of Jerusalem. Shragai continued:

“Every neighborhood on the seam line has an adjacent or nearly adjacent Arab “outlying neighborhood.” Jabal Mukkaber, for example, is a stone’s throw and a gunshot away from the homes of Armon Hanatziv. The Qassam rockets fired on Sderot and Ashkelon would seem like child’s play compared to what would happen here if such outlying neighborhoods are given up. It is enough to recall the firing from the Arab neighborhood of Beit Jala on the neighboring southern Jerusalem neighborhood of Gilo – which went on for years, multiplying the point of friction and distributing it to hundreds of points along a dividing line dozens of kilometers long – to understand what a bizarre reality, one our politicians tend not to talk about, would be our lot.”

Jerusalem is the next “front line” in the war for world-control by Muslims. If they militarize the Jerusalem borders as they have the Gaza borders, WWIII may be reality in our time! Israel cannot cede all of Jerusalem and continue to be a safe haven, a homeland, for the Jewish people. Those who would pressure Israel continually to ‘compromise’ to give more and more ‘land for peace’ are setting the stage for a war they will not win. As you will see below, they not only pressure Israel to compromise, they compromise at home, in their own schools, streets and court systems. We already see that there are no limits to the barbarity of the methods employed in the Islamic struggle for control — first in the Middle East, then Europe and finally (or not finally!) in the US. They work from without in bombings and terror attacks and from within to weaken the determination of the politicians and population to fight the Islamization of their societies. For now, the focus is on Israel, but they also have written that historically that Spain must be Islamic:

There is now a widespread feeling among Muslims that the territories they lost during the Spanish “Reconquista” still belong to them. That they have a right to return and establish their rule there. This is based on the Islamic idea that terrorities such as “Palestine” and Southern Spain which were once occupied by Muslims must remain under Muslim domination forever. “The Rapid Re-Islamization of Southern Spain [“Al-Andalus”]”

But it’s not limited to Spain: They have flooded France with immigrants who are even today marching in the streets, burning and pillaging to ensure control over French policies. All over Europe, in Norway, Germany, Netherlands, and England, just to mention a few, political policies have had to accommodate the demands of the Muslims, to the point of allowing some levels of Shari’a Law to be enforced in England! In some western countries, taxi drivers had to be forced to pick up blind passengers with their guide dogs. If people of non-Muslim countries do not wake up and actively oppose the tactics of Islamization, they will lose their own culture and freedoms. There is no need for the Muslims to wage western style warfare and no way for the West to use it as an effective defense: terrorism, guerrilla attacks and the exploitation of Western courts to limit freedom of speech and even thoughts are destroying the legal protection until now enjoyed by free peoples. Worse, even now Islamic radicals are stealing the children of these countries through the growth and marketing of drugs, radicalization of rebellious youth and criminals (even in prison), the brainwashing of children under the name of Islamic education: These are all very successful methods being employed now in the US and in every European country (though not limited to them). Please…….

12 Responses to Why Israel Should Not Divide Jerusalem