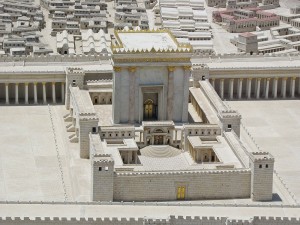 Model of 2nd Temple in Jerusalem

Perhaps you are aware that the 9th day of the Hebrew month of AV  is a Jewish day of mourning,  2nd only to Yom Kippur  (The Day of Atonement) for all of the Jewish people.  On this day, Jews around the world are united in fasting, prayer, and ponder today’s significance of the greatest tragedies of Jewish history – the two-fold destruction of the Jewish Temple in Jerusalem.  Yet this year, yes – this year, as thousands walked around the walls the Old City of Jerusalem, walking past every gate, looking up at Mount Moriah, where the  Temple once stood, the Jews are not allowed to enter, not  allowed to access the mount even through the controlled but unsafe Mughrabi bridge. [see  update on status of bridge repairs:   Mughrabi Bridge in images ]

Only access to Temple Mount by any non-Muslim is over rickety bridge meant to be temporary. UNESCO has “forbidden” strengthening or rebuilding of the bridge due to Arab objections. [Real Jerusalem Streets]

You see it is the holiday of Ramadan for the Arabs and we must never inflict limitation on their access to the mosque on our Temple Mount.  Yes, our Temple Mount. Like the Old City, it was taken in the 1967 war, but as Jews are self-committed to respecting the religion of others and its practice in the Jewish land, daily control over the Temple Mount with the  mosques built there was given to the Arab Mullahs.  From there they preach the destruction of Israel.  From there they dig underneath, weakening the very foundations of their own mosques while destroying 2000+ years old evidence  in order to ‘prove the Jews were never here’.  You’d be surprised how many in the world will argue the truth of their rewritten history, ignoring the very proofs standing before them. See  History Written in the Stones of Israel

And so the Jews mourn, Jewish police holding them back, looking in from without, intimidated by international threats and boycotts from even visiting the Temple Mount on Jewish Holy Days. Under true justice,  who really should be banned from the Mount in order to keep the peace?

List of major tragedies mourned on Tisha b’Av:  The first number is the year according to the Jewish calendar, the (second number) is the corresponding year of the Gregorian (western) calendar.

3340 (421) Destruction of First Temple by the Babylonians, under Nebuchadnezar. About
100,000 Jews killed during invasion. Exile of remaining tribes in southern
kingdom to Babylon and Persia.

5050 (1290) Expulsion of Jews from England, accompanied by pogroms and confiscation of books and property.

5252 (1492) Inquisition in Spain and Portugal culminates in the expulsion of the Jews from the Iberian Peninsula. Families separated, many die by drowning,  massive loss of property.

5702 (1942) Deportations from Warsaw Ghetto to the Treblinka concentration camp begin.

And during the fast, as we look at the array of weapons aimed at us from every side, our prayers go up that no such great disasters again befall us. May God in His mercy be our Defender.

Interesting side note: The UN is an international forum for constant demands for Israel to “return the Temple Mount, actually all of Jerusalem and ALL of Israel. One should ask: To whom should it really be “returned”?  If it must go back to original owners? To whom? How far back? Only 1967? 1948?   The list gets longer and the Arabs will only significantly appear in the picture  hundreds if years after the Temple was destroyed!

Only in the matter of German reparations has any significant attempt ever been made to restore the property or its value to the Jews. Never have they been permitted as a people to return to the place from which they were banished. This covers centuries from the first dispersion through modern times (i.e., Europe, N. Africa, Iran, Iraq, etc.).