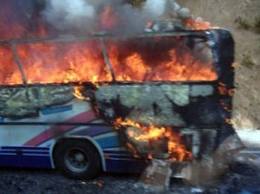 Yes, in Israel we know we were the target and we mourn the loss of innocent vacationers, our men, women, children, who all left family and friends behind, some of whom were there among the wounded. And yes, the personal stories are heartbreaking for each one. But in Bulgaria, while they mourn the Israelis, 9 families are mourning their losses or comforting their wounded. They too have personal stories.

But they are just ‘collateral damage’ to the terrorists.

An incursion into Israel by Islamic Jihadists disguised as Bedouin was terminated by the IDF 2 km inside Israel. While one Egyptian army vehicle blew up at the border (work

accident!), the other succeeded to cross into Israel.  In the explosives laden 2nd vehicle, 8 terrorists wearing bomb vests were killed. In this case a huge terror attack on a small town was prevented and no Israelis were wounded or killed.  However, sixteen soldiers and border guards were killed and another seven were wounded. Egypt declared 3 days of mourning for her losses.

Once again, Israelis were the target; the Egyptians were just ‘collateral damage’.

Note that the BBC refers to them as militants:  Do militants attack civilians with suicide bombs?  Are they militants when they bomb the tube in Britain or the train in Spain? Just asking.

We know from the bombings in Iraq, Afghanistan, Pakistan, Yemen, Saudi Arabia, etc., that these Islamic terrorist consider human life of NO value, even the lives of their co-religionists. Once at least it was Sunnis against Shiites or tribe against tribe. Now the Islamic Brotherhood and Al Qaeda among other groups consider any and all human beings  as a sacrifice for their cause. If they are Muslim, they will receive honor in the afterlife. If not, well, infidels must convert or die, so……..

With the exception of anti-Jewish pogroms,  holy places were once commonly thought to be off-limits.  Today, synagogues, churches, mosques are all legitimate targets.  If the jihadists consider the people within or nearby to be a target, any and all gathered for prayer must be sacrificed. Men, women and children are murdered by Islamic Jihadists and most of dead are just  ‘collateral damage’.  Today mosques have become storerooms for weapons, meeting places to plan terror attacks and even bomb-making sites. At the very least, mosques all over the world are recruitment sites for local Muslims or would-be converts.

All non-Muslims  in  any country are  primary targets, Jews first, then Christians, then secular. All are infidels. Muslims as well as other passers-by are legitimate ‘collateral damage‘, justified by the value of the target.

It’s interesting to note that in the recent wars, the Muslims have frequently used civilians as human shields during their attacks. Then if /when these civilians are killed or injured, for the anti-jihadists side their deaths as ‘collateral damage’ are to be avoided if at all possible. However, to the Islamist Jihadists and the leftist media, they are innocent civilians deliberately murdered by the IDF, US, NATO, you name it. In truth, to the jihadists they actually are expendable ‘collateral damage’, unwilling participants in the Islamic jihad of the terrorists.

So, while it is most often Israelis who are targeted both in Israel and wherever they travel, no people, no nation, no human being on the planet is safe from death as a result of  the Islamic Jihadist’s twisted ideology/theology. Israelis and non-Israeli Jews know they have a target on their backs. But anyone anywhere can be ‘collateral damage’.