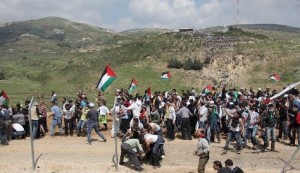 Today the Lebanese Goverment has commended the Lebanese military for firing at Israeli soldiers this morning in a new Israel-Lebanon border ‘incident’.  No Israelis were injured, 1 LAF soldier was reported wounded.  It’s not clear whether this was, again, a rogue soldier claiming Israelis crossed the border (like last year) or whether this is the beginning of a new series random attacks such as Hamas carries out from Gaza. Who knows? Maybe it was even directed from Beirut.

It’s doubtful that even security services know what lies ahead. The change since the last attack is highly signigicant:  Hizballah now controls the Lebanese government and its military services.  Last year the Lebanese government ‘handled’ the situation making it a one-time only event — the UN confirmed that Israelis had not crossed the border and that ended the situation.  This time the army has received praise for the attack.

In addition, while Syria’s Assad is on full war footing against the now well-armed revolutionaries with 150+ killed, 1000+ injured in Sunday pre-Ramadan assault,   Turkish forces sit on the Syrian-Turkish border with attack plan in hand. But they can do nothing. They have been essentially neutralized by the en masse resignation of the top ranks of all branches of the secular Turkish Defense Forces in response to the arrest many ranking officers (charged with plotting to overthrow the government).

Meanwhile, as critical as the situation is for the future of Turkey and its NATO allies, the fallout is immediate and deadly for Syrians. It has provided a window of opportunity, one Assad is using to go full bore against the rebels and indiscriminantly against Syrian civilians in rebel areas without worrying about Turkish intervention.  While Iran is helping keep the West in check, even US protege Turkey is now stymied.

It is difficult to predict the actions of the heavily-armed Hizballah directing the Lebanese military who regularly patrol the border with Israel.  It’s also not clear  what Iran’s instructions to Hizballah will be as Tehran tries to prop up Assad both directly and through Hizballah.  It wouldn’t be the first time that a  mini-war with Israel would be used to divert world attention from Syrian slaughter or Iranian machinations. They have little fear of real defeat: They’ve been able to count on the West and the UN to call Israel off when they are ready.

Is Israel the Cause or the Cover?

What so many western politicians and opinion-makers miss is that even were there no Israel, this region would be a powder keg. Unfortunately, there is oil and there are always those with the motives of money and power, ready to create the local version of class warfare  to fulfil their own lusts no matter how many die or suffer.

Some of the more obvious factors creating the clouds of war:

While before blood, death and destruction were localized, now our modern ‘humane’ era provides the ability to slaughter more with less, weapons that threaten all of mankind.

Israel may well be in midddle of the cauldron with the makings of a conflagration and total chaos on her northern, eastern, western and southern borders.  But no one on the planet will be able to escape the results if those stirring the pot aren’t stopped.